Author and managing editor of Navy Times John Grady has published a definitive new biography, Matthew Fontaine Maury, Father of Oceanography: A Biography 1806-1873. This new book includes details on Maury’s life growing up in Tennessee, where the Society will have its annual meeting in 2017. The book was published in 2015 in Jefferson, North Carolina, by McFarland & Co., and the 354 page book includes a bibliography as well as an index. The summary on Mr. Grady’s webpage states:

“In becoming “a useful man” on the maritime stage, Matthew Fontaine Maury focused on the ills of a clique-ridden Navy, charted sea lanes and bested Great Britain’s admiralty in securing the fastest, safest routes to India and Australia. He helped bind the Old and New worlds with the laying of the transatlantic cable, forcefully advocated Southern rights in a troubled union, and preached Manifest Destiny from the Arctic to Cape Horn. And he revolutionized warfare in perfecting electronically detonated mines. Maury’s eagerness to go to the public on the questions of the day riled powerful men in business and politics, and the U.S., Confederate and Royal navies. He more than once ran afoul of Jefferson Davis and Stephen R. Mallory, secretary of the Confederate States Navy. But through the political, social and scientific struggles of his time, Maury had his share of powerful allies, like President John Tyler.

The book is available for purchase from Amazon.com. 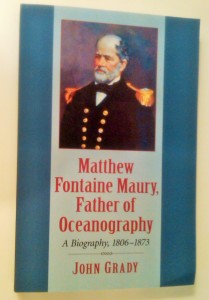