The Executive Committee is pleased to announce that the Society’s 2019 annual meeting will take place in October 2019 in San Antonio, Texas.

The theme will focus predominantly on two Maury sisters who “went west” from Virginia to settle in San Antonio – Jane Lewis Maury (1858-1954) and Ellen McGregor Maury (1860-1926), descendants of Mary Ann Fontaine and Matthew Maury. The sisters were born in Charlottesville where Jane married in 1877 with Albert “Allie” Maverick and Ellen in 1883 with James Luther Slayden.

Allie Maverick was a native of San Antonio and went to Charlottesville to attend the University of Virginia; his father was a signer of the Texas Declaration of Independence and the source of the term of when someone is a “maverick.” Allie was a gregarious man and well-loved in San Antonio where he and Jane lived on the Sunshine Ranch for over 40 years, the site of many famous and large Sunday night suppers. Jane and Allie had a number of children, including Maury Maverick Sr., who was a U.S. congressman who coined the word “gobbledygook” who was later the San Antonio mayor. Another son George Madison Maverick purchased the Jaques Fontaine 1720s manuscript from the Minor estate and placed it in the Alderman Library at the University of Virginia for its preservation.

Ellen Maury’s husband James Slayton was elected to represent San Antonio in the U.S. House of Representatives in 1896 and he continued in that position for 22 years.  They had no children. 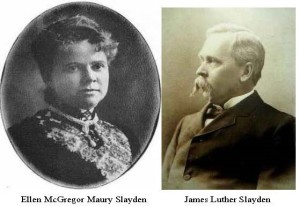 Both sisters were published writers.  Jane Maury Maverick wrote several books, Mission San Jose and A True Romance of the Alamo. Her husband Allie wrote A Maverick Abroad: Foot Travels in England and France. Their son James Slayden Maverick wrote Maverick Ancestors of the Maverick Family of Texas and their great-granddaughter Ellen Maury Davis Cassidy compiled the book, The Mavericks of Sunshine Ranch: Writings of Jane and Albert Maverick and their Granddaughter Mary Maverick McGarraugh.  Ellen Maury Slayton wrote a journal that was published posthumously as Washington Wife: From the Journal of Ellen Maury Slayden from 1897 to 1919 about her life in Washington, D.C.

Among the places we may visit during our weekend include land that was part of the Sunshine Ranch, St. Mark’s Episcopal Church, the Albert Maverick Building, Mayor Maury Maverick Plaza, and the cemeteries where the two sisters and their husbands are buried.

There are other Fontaine and Maury ties to San Antonio including several family members from different branches who went to San Antonio which was the assembly point for troops for the 1848 Mexican War.

Please check back for more details as we have them. For now, please mark your calendars for an October 2019 visit to San Antonio!