Due to the on-going COVID-19 pandemic, the Society’s Executive Committee has decided to postpone the annual meeting weekend in Louisville, Kentucky, from October 16-18, 2020, until October 15-17, 2021, still in Louisville.

Anyone who has already made hotel reservations should contact the hotel (502-637-2424) to cancel; your reservations will not be automatically canceled because of the postponement of the meeting.

The Executive Committee is developing a plan to hold a virtual business meeting on Saturday, October 17, 2020.  This will still provide members and guests a great opportunity to participate and hopefully then participate in our in-person meeting in 2021.

We will announce further details on this planned virtual business meeting when we have them.

The Executive Committee wishes everyone well and hopes you remain safe and healthy during this difficult time.

The library is excited to report the donation of a 251 year old family Bible to the Society!  Inherited by a Maury descendant in Maine, she reached out to our librarian to arrange to donate it to the Society. 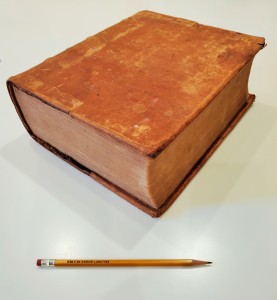 It belonged to James Maury (1746-1840), son of the Rev. James Maury (1718-1769) and Mary “Mollie” Walker (1724 -1798) and grandson of Mary Ann Fontaine and Matthew Maury.  James  is well-known as the first American Consul General to Liverpool, England, a position for which he was selected by George Washington.

This large Bible is almost 6 inches thick and measures 9½ inches wide x 11½ inches tall; the picture of it with a pencil is intended to show its size.  A slipcover was added to the Bible at some point to protect the original binding.  It was printed in 1769 in Oxford, England.  It contains eight pages of handwritten information by James Maury.  The first five pages are written in the front of the Bible:

The title page includes a transcription that the Bible was given to James S. Maury in 1828 by his father.  This was James Sifrein Maury who died unmarried in 1864 with no heirs.  It is exciting that the Bible was still passed down through the Maury family and has found its way to us!

At the back of the Bible are undated entries that provide information about James’ in-laws, William Rutson and Elizabeth Colton and their children, including James’ wife Margaret, then a biography he wrote about his wife.  The last two pages include James’ 1830 transcriptions from texts of the Episcopal and Presbyterian Churches in Charlottesville, Virginia.

We will provide a transcription from this amazing Bible in future newsletters – renew your membership today!  For additional photographs of the Bible and the handwritten entries by James, please visit the Society’s Facebook page!

There is still some availability to sign up to attend our annual meeting weekend in San Antonio, Texas, the weekend of October 18, 2019! The hotel is still honoring our Society special rate; to make your hotel reservations and to submit your registration form to the Society, follow the instructions on our form.

For those who are already registered to attend and will be flying to San Antonio, the hotel provides a free shuttle service between the airport and hotel. When arriving, simply call the hotel at 210-340-6060 and ask for a pick-up at the airport. The hotel will tell you where to wait and how soon the shuttle will be there.

Once at the hotel and checked in, come find the Society’s registration table in Hallway Texas D&E to let us know you’ve arrived and pick up your welcome package. The registration table will be open from 10 am to 12 pm and from 3:00 to 6:00 pm on Friday, October 18.

We look forward to seeing many of you in San Antonio!

A reminder to make your hotel reservations directly with the hotel and send in your registration form to our Society’s treasurer by September 18! This will ensure you receive a special Society rate at the hotel and we can finalize all the plans for our San Antonio weekend of October 18-20.

The contact information for the hotel is included in the attached registration form.

We hope to see you all in Texas!

The Society’s Executive Committee has finalized the arrangements for our annual meeting weekend!   We will meet in San Antonio, Texas, the weekend of October 18-20, 2019.

Please use the information on the attached form to make your hotel reservations directly with the hotel, then complete the form and mail it to the address listed, together with your registration check, no later than September 18, 2019!

We have a fun, full, and interesting weekend planned and we hope to have a terrific turnout!

This new Maury book is by historian Richard Nicholas, the first publication of Stephen Price Maury’s (1850-1941) memoirs.  A native of Charlottesville, Virginia, Price was an adventurer, a world traveler, served in the British Navy, and a civil engineer.  He spent much time in San Antonio where he met and married his wife and where two of his sisters – Jane Lewis Maury (1858-1954) and Ellen McGregor Maury (1860-1926) – settled and who will be the predominant focus of this year’s Society annual meeting weekend (October 18-20, 2019).

This 156 page paperback book contains Price’s memoirs, annotated by Mr. Nicholas with further details on Price and the events in the memoirs.  The book includes photographs, maps, and a family tree.

The book is $25 and available directly from the publisher, Blackwell Press, or from Amazon.com.  Please note that the book is not  available through the Society.

This book is an excellent new addition to our Fontaine and Maury family histories.  Its timely publication will be a great read for those attending our annual meeting in San Antonio in October 2019!

The Society is excited to announce the availability of a tremendous new resource from our library that provides a pictorial history of our Society and of our family history.

Our late former President, Dr. John May, compiled a photo album of each annual meeting weekend beginning in 1977 and covering most years through 2013 – 36 years of our Society in pictures!  Each of the seven volumes is a blend of photos, maps, and other handouts from our annual weekends together.

Dr. May donated the albums to the library several years ago which our librarian has brought to annual meetings for attendees to enjoy.  After our October 2018 annual meeting, the Executive Committee approved having the albums digitized to make them available for everyone to enjoy.  We had each item in the albums photographed and compiled in folders for each of the seven volumes.

The library is now making this single CD available for purchase for $8.00.  Each of Dr. May’s albums are in their own folder on the CD, with the total number of images over 600.  Six of the albums cover most years from 1977 to 2013; the seventh volume contains a Fontaine Pictorial Family History.

It is a fitting tribute to Dr. May who passed away in May 2019 that more of his labor of love for our family history is now available for all to enjoy.

For the order address and payment information, visit the Society’s library page.

As previously announced, our 2019 annual meeting will be in San Antonio, Texas!  Our plans are well developed and full details will be coming out soon in tandem with our summer newsletter.

We will start our weekend with a special event in the afternoon of Friday, October 18, our annual business meeting that night at the hotel, and then a full day tour and our annual dinner at the hotel on Saturday, October 19.  There will be no organized events on Sunday, October 20.  Please plan to come in time to attend the Friday afternoon event!

The hotel is giving us a special rate of $109.00 per night plus applicable state and local taxes, bringing the total per night to $128.62.  This special rate includes breakfast for two per room, free parking, and free shuttle within two miles of the hotel.

Please make your hotel reservation directly with the hotel by September 18, 2019, in order to get our special rate and to ensure you can get a room.  To make your reservation, please use this link which is already set up just for our Society that will ensure you receive the Society’s group rate, or call the hotel directly at 210-340-6060, or fax to 210-377-4695.  Remember to tell them that you are with the “Fontaine Maury Society” (group code FMS) to get our group rate!

Some belated but good news from 2018.  The Virginia Department of Historic Resources provided a grant of $1.15 million to the American Battlefield Trust (that preserves Revolutionary War and Civil War battlefields to preserve them for history) to acquire 562 acres.  The funds will acquire property at the Revolutionary War battlefield at Yorktown where five known Fontaine family members served, at the Civil War battlefield at North Anna where a Fontaine home was damaged and Jaques Fontaine’s 1720s manuscript was partially damaged, and six other battlefield locations in Virginia.  The Society partnered with the Trust when it saved the North Anna battlefield.

The Executive Committee is pleased to announce that the Society’s 2019 annual meeting will take place in October 2019 in San Antonio, Texas.

The theme will focus predominantly on two Maury sisters who “went west” from Virginia to settle in San Antonio – Jane Lewis Maury (1858-1954) and Ellen McGregor Maury (1860-1926), descendants of Mary Ann Fontaine and Matthew Maury. The sisters were born in Charlottesville where Jane married in 1877 with Albert “Allie” Maverick and Ellen in 1883 with James Luther Slayden.

Allie Maverick was a native of San Antonio and went to Charlottesville to attend the University of Virginia; his father was a signer of the Texas Declaration of Independence and the source of the term of when someone is a “maverick.” Allie was a gregarious man and well-loved in San Antonio where he and Jane lived on the Sunshine Ranch for over 40 years, the site of many famous and large Sunday night suppers. Jane and Allie had a number of children, including Maury Maverick Sr., who was a U.S. congressman who coined the word “gobbledygook” who was later the San Antonio mayor. Another son George Madison Maverick purchased the Jaques Fontaine 1720s manuscript from the Minor estate and placed it in the Alderman Library at the University of Virginia for its preservation. 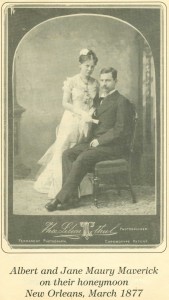 Ellen Maury’s husband James Slayton was elected to represent San Antonio in the U.S. House of Representatives in 1896 and he continued in that position for 22 years.  They had no children.

Both sisters were published writers.  Jane Maury Maverick wrote several books, Mission San Jose and A True Romance of the Alamo. Her husband Allie wrote A Maverick Abroad: Foot Travels in England and France. Their son James Slayden Maverick wrote Maverick Ancestors of the Maverick Family of Texas and their great-granddaughter Ellen Maury Davis Cassidy compiled the book, The Mavericks of Sunshine Ranch: Writings of Jane and Albert Maverick and their Granddaughter Mary Maverick McGarraugh.  Ellen Maury Slayton wrote a journal that was published posthumously as Washington Wife: From the Journal of Ellen Maury Slayden from 1897 to 1919 about her life in Washington, D.C.

Among the places we may visit during our weekend include land that was part of the Sunshine Ranch, St. Mark’s Episcopal Church, the Albert Maverick Building, Mayor Maury Maverick Plaza, and the cemeteries where the two sisters and their husbands are buried.

There are other Fontaine and Maury ties to San Antonio including several family members from different branches who went to San Antonio which was the assembly point for troops for the 1848 Mexican War.

Please check back for more details as we have them. For now, please mark your calendars for an October 2019 visit to San Antonio!