The Reformed Church Saintonge Océan in southwest France invited the Society to attend a dedication ceremony on June 20, 2015, in Saint-Palais-sur-Mer for the parish house renamed for the Reverend Jaques Fontaine (1603-1666). The area is rich in Fontaine history; the church has put together an excellent a week-long schedule of events to visit locations of importance to the Fontaine family, including a tour of the reformed churches part of the Saintonge Océan parish, family sites in Jaffe and Royan, la Tremblade from which the younger Jaques Fontaine sailed for England, La Rue du Roy the birthplace of Marie Chaillou, Jaques Fontaine`s wife and James Fontaine`s mother, and La Rochelle the safe haven for Huguenots.

The day of the dedication ceremony of the “Jacques Fontaine Protestant Center” in St. Palais-sur-Mer was a beautiful sunny day on the southwest coast of France when 40 members and friends of our Society joined with the parishioners, residents and political leaders in the extended Royan community to participate in the dedication ceremony to rename the parish house for the Reverend Jacques Fontaine (1603-1666).

The ceremony was led by Monique Chauvreau, the president of the Reformed Church-Saintonge Océan, who was joined by other speakers, including Dominique Bussereau, president of the County Council, Didier Quentin, Deputy Mayor of Royan, Claude Baudin, Mayor of Saint-Palais-sur-Mer, Marie-Pierre Quentin and Fabienne Aucouturier, departmental councilors, and Pastor Wolfram Steuernagel, one of our hosts for the full week of events. Two Society members presented our remarks to thank them for inviting our Society to join them in this dedication ceremony that honored our ancestor who was pastor of the United Church of Vaux and Royan from 1627 to 1666.

They explained that our Society bases its origins on the wishes expressed in the memoirs of Jacques Fontaine`s son, Jaques (1658-1728), who left this place 330 years earlier. Jaques wrote that he wished that all members of the family remain close through the ages. Our Society was founded on these wishes, with membership representing descendants of three of his four children, grandchildren of the Reverend Jacques Fontaine honored, who went to live in colonial Virginia – the Reverend Peter Fontaine, the Reverend Francis Fontaine, and Mary Ann Maury. They noted that our Society was represented at the ceremony by descendants of all three of these siblings.

They then read the benediction read at each Society annual meeting written by the Reverend Peter Fontaine and then closed with another quote from Jaques` memoirs:

“The examples of those from who we descend may encourage you to dedicate yourselves to the service of God, whom they worshiped at the risk of their lives. I hope you will continue to cling to the reformed religion for which they suffered so many hardships and trials of faith.”

After their prepared remarks, the speakers together lifted the veil covering the plaque with the new name of the parish house. The ceremony was followed by a reception and then followed by a luncheon hosted by the church.

The week-long visit was filled with activities. Thirty-five members of our Society were welcomed by a reception hosted by the parish of Saintonge Océan on the first night of our arrival in Vaux-sur-Mer, France. The parishioners served us an incredible meal, the first of several during the course of our week-long visit. We sang “Amazing Grace” in French and English to bless our food, which was surely heard by and pleased both Jacques and his son Jaques Fontaine. Marie-Claire André Delhaye who had the vision for the dedication and invited Society members to join in the celebration, organized a tour for us and gifted each of us with her book, Vaux-sur-Mer: Vingt Siècles d`Histoire [20 Centuries of History]. In gratitude, the Society presented her a bowl from the White House which left her speechless, and presented framed photographs for our colonial Virginia churches served by Fontaine ministers. Several of the parishioners joined us on our tours.

Several of the locations we visited are mentioned in the memoirs. These included: Mus de Loup, the spot on the Seudre River where the Fontaine family embarked for England – the wood of Jaffe/Chatelard/Jenouille where Jaques purchased land and raised his family with the help of his second wife Marie Chaillou – La Rue au Roy, Marie`s birthplace, the citadel on Ile d‘Oleron where Jaques` brother Pierre was probably held as a prisoner in 1682– the house at 6 Rue du Port in La Rochelle where the family may have lived – Saumur and its Protestant Academy where Jaques was enrolled – two sites near Le Mans, Chahaignes and Sévilly where members of the family may have lived in the 16th century- the Cathedral of Le Mans which was pillaged in 1562 by Protestants, that included Jean de la Fontaine. The group toured the Protestant museum in La Rochelle where they learned about the siege of La Rochelle in 1627-28 ordered by Louis XIII and Cardinal Richelieu.

The group learned about the hardships that followed the Revocation of the Edict of Nante a period known as “The Desert” during which Protestants secretly endured. If one was caught attending worship, owning a Bible, or singing Psalms, men were sent to the galleys, women to a convent or a prison, or even killed. Ministers caught preaching were hanged. Our group visited a cemetery where a leading pastor, Pierre Dugas, is buried, and a meeting place in the woods where Protestants are recorded to have met in large numbers to worship despite the danger. In 1789 religious freedom was restored by the Declaration of the Rights of Man. French Protestant churches today are known as Temples.

The Society group had a number of wonderful meals and was amazed at the number of local dignitaries who met with us and support the Protestant community. The way the state and church work together in the west of France was heartening to see. Thanks to all the many pastors and the dear people of Charente-Maritime who made us feel at home. 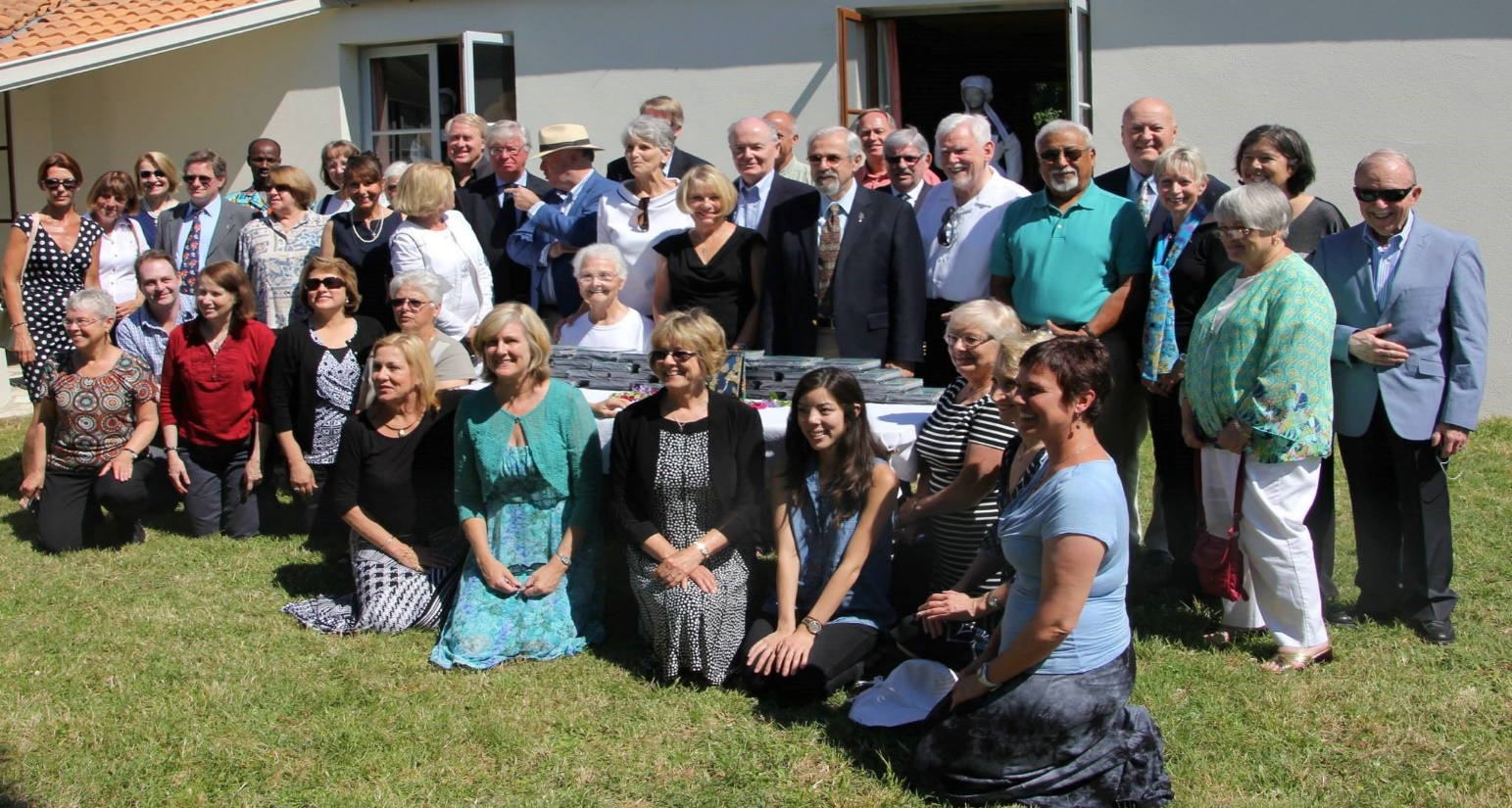 Society members and their hosts at the Jacques Fontaine Protestant Center